Then and Now: Violin

The Medieval fiddle or vielle, a probable precursor to the violin. This replica is based on iconographic sources from the 11th century on. It has five strings and is bowed.

A rebec is another bowed lute that probably contributed to the development of the violin. The rebec is almost certainly of Middle Eastern origin and might have been introduced to Europe as early as the 11th century. It appears to have been in widespread use from the 13th century to well into the Renaissance period before, in the 16th century, early forms of the violin began to supersede it. 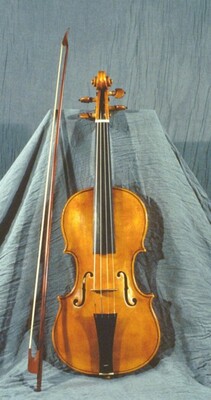 A modern-day replica of a late Baroque and Classical era violin. Gut strings are used, and the fingerboard is noticeably shorter than on modern violins.

A modern day violin manufactured in the late 19th century. Uses metal-wound nylon and steel wire strings and is a good deal louder than its eighteenth century predecessor. A chin rest is also attached to make supporting the instrument easier.

The same passage of music played on a Baroque violin (first clip) and a modern violin (second clip) provide a comparison of the sound qualities of these two instruments.