Steel Band from Trinidad and Tobago

The steel band was first developed in Trinidad, in the British West Indies, in the 1930s and 1940s accompaniment for masked processions and parades during Carnival. The roots of this musical formation extend back into the 19th century when neo-African and East Indian drum ensembles were used as road-march bands during street and religious ceremonial processions. As part of a long-standing campaign against lower-class African cultural influence in Carnival, the 1884 Peace Preservation Ordinance banned skin-head drumming, stick-fighting (kalenda), and the brandishing of burning cane (kanboulay). From 1890 to 1900 a ‘band system’ developed as the ‘Hell-Yard,’ Port of Spain, neighborhoods organized large groups of Carnival masqueraders. Percussive and concussive lengths of bamboo were employed for the same function in lieu of the prohibited drums. Tamboo-bamboo bands, as they came to be called, were progressively augmented by metallic devices (dust bins, pots, brake drums). In turn, tamboo-bamboo instruments were banned in 1934 to combat destructive poaching on colonial bamboo plantations and curtail intra-band violence. In 1937, the vogue for metal sounds reached its peak, and tamboo-bamboo was purportedly replaced, for the first time, by the all-steel Alexander’s Ragtime Band. To achieve this timbre, the inclusion of household or non-musical objects was common: soap boxes, biscuit tins, dustbins, gin bottles and odd scraps of iron. At the end of the Second World War, American 55-gallon oil drums littered the island from which idiophones began to be fashioned, extending the range and versatility of ensembles. The 1940s saw a series of innovations leading to the development of tuned, sunken, multi-pitched oil drums, which tuners elaborated into discrete pitch sets. Fierce competition between rival bands left a material record in the idiosyncratic apex patterns, dating from the 1950s and 60s, when intense rivalry discouraged the sharing of tuners between bands. The subsequent insularity of tuners fostered innovation and experimentation in pan design and tuning, and delayed the eventual emergence of the steel band industry until the 1980s.

After WWII, bandsmen became local stars, and band participation became a powerful shaper of social identity. Animosity between steel bands sparked the ‘band wars’ of 1945 when tension between two groups,‘Hell Yard’ and ‘John-John,’ led to widespread street fights. The social organization of bands involved gangs of lower-class boys, 'Bad Johns,' whereby membership in an ensemble equated to hooliganism and creole disdain for European norms. In the 1950s the British government addressed the tension between colonial and creole cultures through nationalizing the orchestra, establishing the Steel Band Association and the TASPO (Trinidad All-Steel Percussion Orchestra), thus acknowledging the steel band as an indigenous orchestra. The music became increasingly cosmopolitan in nature; steel bands in Trinidad performed an eclectic repertory of music spanning from calypsos and other Latin American dance music, to film songs and European art music. Teaching bandsmen happened almost exclusively through aural transmission. The 1960s saw efforts in education-integration and government sponsored competitions, helping to reform the gang related antisocial stigma. By the 1970s, an estimated 200 bands with some 5000 players were established in Trinidad and steel band music had spread throughout the English-speaking eastern Caribbean.

By far the most common, and iconic, use of a steel band is during Carnival. Reflecting this, the most common steel band conventions of melodic phrasing and rhythmic structure are related to calypso music, a Caribbean musical form having evolved alongside steel bands to accompany street dancing during Carnival. Carnival celebrations, through the Trinidad creole diaspora, have been introduced to cities in Britain, Canada, and the United States. Aside from Carnival use, the steel bad is performed as commoditized tourist music not only in Trinidad but also on many other Caribbean islands, and it has been appropriated by music educators internationally. Its repertoire includes calypso and other local music, arrangements of orchestral standards, film music and popular hits. In cosmopolitan art music circles, works for or including steel drums have been composed for by Henze, Boulez, and Grisley among others.

The steel band's primary constituents are steel pans or steel drums (or simply pans), but may also include other traditional and ad-hoc rhythm instruments. Pans are aggregate gongs (shared contiguous rim) comprised of anywhere from 3 to 29 apexes divided from a common surface. An average pan orchestra can produce notes from C1 - F-sharp6. Every pan is fashioned from the bottom of a 55-gallon oil drum (also known as a pan). The two main factors differentiating the types of steel pan instruments are the varying number of vertices and differing skirt lengths.

Within the steel pan family, the names of the various members and their precise ranges are not standardized. One way of grouping the instruments is into four distinct categories: frontline, mid-range, background, and engine room. The frontline contains the highest pitched pans, the tenor (or lead) and the double tenor or double seconds; the mid-range contains the triple guitar or triple cello and the quadrophonic; the background contains the lowest pitched instruments in the pan family, the dudup, 4-note bass, tenor bass, and six bass; the engine room is a catchall for the un-pitched members of the orchestra. Each of these categories is represented in every steel band performance, but not every instrument of each category will be present. The Grinnell College steel band is made up of tenors, double-seconds, triple-guitars and a six bass. These categories reflect morphological differences that are a consequence of pitch range, but are also tied to musical application. Frontline pans are the highest pitched instruments in the orchestra and usually play the melody, countermelodies or provide high harmonic support. The mid-range instruments provide harmonic support and occasional countermelodies. The background steel pans play bass lines, grounding and defining a piece’s overall harmonic shape. The engine room supports the orchestra with timelines and helps drive the rhythm forwards. While not steel pans and therefore not the focus of this article, engine room instruments are important contributors to a pan orchestra’s sound. Below, following the images of the four pans, are pictures of some of the instruments commonly found in a steel band’s engine room: drum set; congas; güiro [called ‘scratcher]; claves [called ‘toc-toc’]; cowbell; and brake drums [called ‘irons’]. Which, if any, of these instruments are used can vary from band to band and with the repertoire being performed.

Pitch, tuning, note layout, and nomenclature were non-standardized as recently as circa 1980. The note layout on pans is not consecutive and a number of layouts exist, though bands often utilize only one. This is so in part because each gong on a pan when struck gives off to some extent the pitches of its neighbors and therefore, adjacent/contiguous gongs are tuned to perfect consonances (octaves, 4ths, and 5ths). The layout of gongs on the instrument is becoming more uniform in part due to these harmonic implications, and also to a growing steel band industry.

During performance, pans may be slung from the player’s neck, mounted on wheels or wheeled racks for Carnival, or on stands for stationary concert performances. All steel pans are struck idiophones where players hold a padded stick beater in each hand, often alternating attacks, as they strike the instruments’ vertices. Pan sticks are rubber-headed and lightweight to protect against throwing the gongs out of tune during rapid attacks. Tremolo and rapid arpeggiations are used in lieu of an actual sustain.

Most steel bands today are open to participants of both genders and can consist of up to one hundred players performing on more than three hundred different instruments. Orchestras of this size are capable of creating sound pressure levels in excess of 120db in the frequency range of 50 Hz-1.4 kHz. 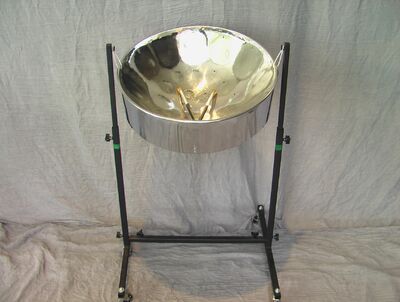 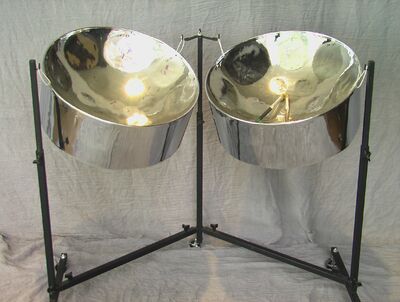 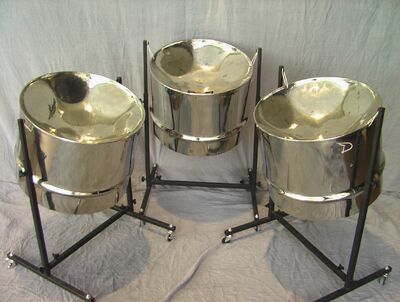 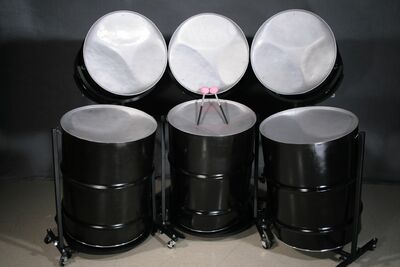 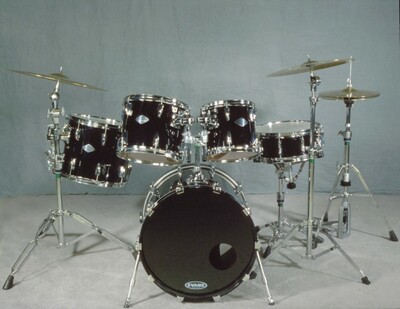 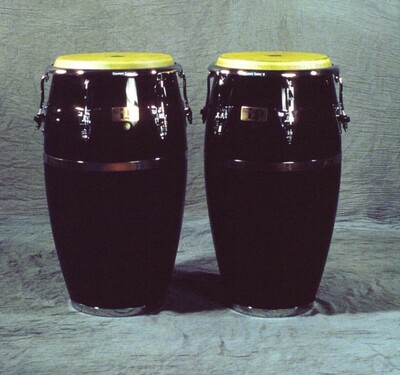 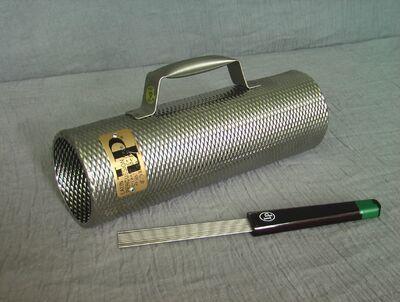 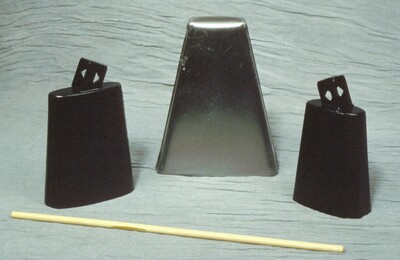 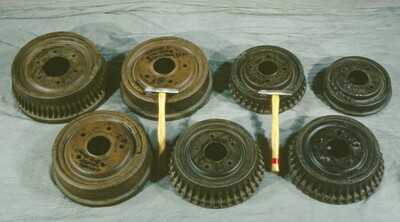