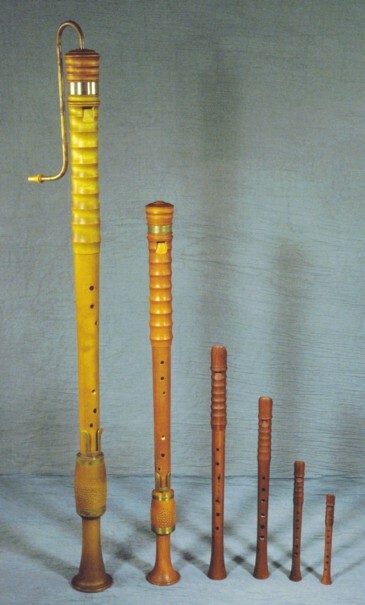 The recorder of the Renaissance period of western music history (approximately the mid-15th century to the end of the 16th century) was not so much a solo instrument as an ensemble one. The basic design idea of this end-blown duct flute was replicated in a variety of sizes (and ranges) that roughly corresponded to the ranges of vocalists. They were typically played together as an ensemble (consort) with a homogeneous sound quality to perform polyphonic music. The Grinnell College Renaissance recorder consort of twelve instruments includes two each of the six different sizes of recorders seen in the photo: (from left to right) great bass, bass, tenor, alto (also called ‘treble’), soprano (also called ‘descant’) and sopranino. This image illustrates nicely the relative sizes of these six instruments. The great bass, tenor and soprano (the first, third and fifth instruments from the left) are pitched in C, and one can easily see that the length of each is half that of the preceding one. Likewise, the bass, alto and sopranino (second, fourth and sixth recorders from the left) are pitched in F and display the same relative lengths to one another as do the recorders pitched in C. Renaissance instrumental part music was not written specifically for the recorder; instrumentation was not specified, making the music suitable for any consort of wind or stringed instruments.