Then and Now: Bassoon 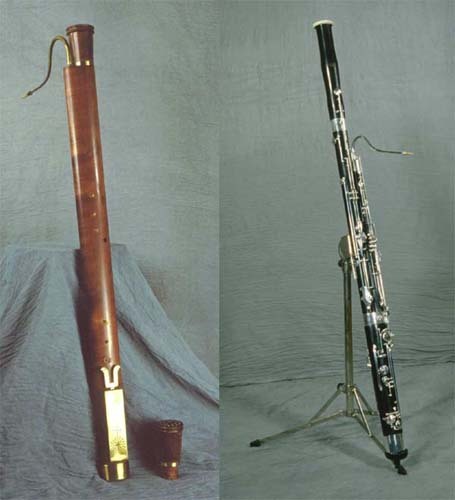 The dulcian, a Renaissance precursor of the modern day bassoon. This replica is probably based on a surviving instrument from the second half of the 16th century that was part of a consort of six differently sized instruments. Made from a solid piece of wood with a conical bore that doubles back upon itself at the bottom of the instrument, the instrument has one brass key, six fingerholes and one thumbhole. The double reed is placed at the end of a curved brass crook.

The modern bassoon is made in four sections or joints, but the bore still doubles back on itself at the bottom end of the instrument. The intricate key-work began to take on its current complexity around the middle of the 19th century when key design ideas by Theobald Boehm for the flute were applied to the bassoon. Usually made of wood, plastic has also come to be used for the body of the bassoon, as is the case with the pictured instrument.